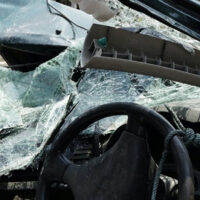 A car crash that has left three people dead has prompted a Daytona Beach Police force investigation to identify the other car involved. According to Fox 35 Orlando, the accident occurred on Labor Day. Surveillance video showed two vehicles racing down the street with sparks flying before one car slammed into a tree.

According to the police who have seen the surveillance, a second vehicle was travelling alongside the victim’s car in the same direction at the time of the crash. Police hypothesize that the vehicles were drag racing. The second vehicle, a black sedan, was leading the victim’s car. After the crash, the black sedan doubled back and passed the scene of the accident. Unfortunately, no one from the sedan called emergency services to report the crash.

If the two vehicles were drag racing, then that fact might explain why no one reported the accident. Racing on highways is a crime in Florida, per statute 316.191. According to the statute, operators of motor vehicles cannot race each other on a roadway, highway, or parking lot. It is also a crime to knowingly ride in a car that is racing, even as a passenger.

Violation of the statute is a first-degree misdemeanor that is punishable by a $1,000-$3,000 fine and a jail sentence of up to one year. Multiple violations can result in increased penalties, including more time in prison.

There is a simple reason drag racing is illegal—it creates unacceptable risks to other motorists and pedestrians. Drivers who are racing can easily lose control, and they are typically travelling to fast to be able to brake in time to avoid hitting them.

Florida has certainly seen its share of drag racing accidents on our roadways. Few people can forget the 2018 accident in Tampa in which a mother who was pushing her child in a stroller was mowed down by a vehicle racing down the highway. The mother died.

If you were injured by drivers engaging in drag racing, you should definitely pursue a personal injury claim. Injured victims can receive compensation for a variety of economic and non-economic losses, including medical bills, lost wages, property damage, and pain and suffering.

If a drag racer kills a loved one, then family members might also be able to bring a wrongful death lawsuit for compensation. Any lawsuit you file is independent of a criminal case the prosecutor might bring.

At Bundza & Rodriguez, P.A., our Daytona Beach personal injury attorneys are experienced at holding culpable motorists legally responsible for the injuries they cause. We have obtained favorable settlements for countless motorists. To find out more about what compensation you can receive, please reach out to us today.

You can schedule a free initial consultation with one of our attorneys by calling toll-free, 866-785-5470 or submitting an online contact form. Please do not delay.