How the Bahamas is Recovering from Hurricane Dorian 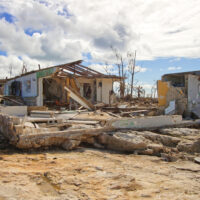 Dorian might have missed making landfall in Florida, but the storm ended up devastating the Bahamas. The storm stalled out directly above the islands for days, and according to some estimates about half of the $7 billion caused in damage occurred in the Bahamas. This is an amount equal to the entire economies of Texas, California, and Florida.

The Miami Herald decided to visit the islands to see how storm recovery is going. Unfortunately, the news is frustrating.

Pictures show entire city neighborhoods wrecked by the storm, with not a single structure still standing. Many communities have not been able to rebuild, so people live and do business inside tents. According to official estimates, Hurricane Dorian left around 30,000 people homeless or without a job.

In some parts of the Bahamas, the winds did not cause enough damage to blow the roofs of houses. Nevertheless, the storm surge has rendered many of them uninhabitable because of the growth of black mold. This is why survivors must move quickly to dry out their homes and remove water-logged items soon after a hurricane.

Housing is always a problem after a storm like Dorian. Florida found this out the hard way after Hurricane Michael struck in 2018. There are still families in the Panhandle living in trailers over a year after the hurricane landed.

In the Bahamas, entire families line up outside churches for hot meals provided by US-based volunteers. Many people are still struggling to find adequate food months after the hurricane hit.

No city can really recover from a hurricane until it can rebuild. After Dorian, rebuilding has been slow, just as it was after Hurricane Irma struck the Florida Keys in 2017. That storm wrecked most of the area’s affordable housing stock, much of which has not yet been rebuilt after years, putting a strain on local and federal resources.

Even some private homeowners are still waiting to receive either government money or benefits under an insurance policy. Certainly, the rebuild has been slow and frustrating in the Bahamas as well. Their government is set to open a Family Relief Center where up to 200 families can live while their homes are being rebuilt. This center is designed to withstand winds of over 200 miles per hour.

Officially, over 240 people are missing due to Dorian. Some bodies have been recovered from rubble but not yet identified. Officially, the hurricane has claimed 69 lives, but that number will probably continue to grow. Thousands more suffered serious physical injuries in the storm.

All of this damage has created a mental health crisis in the Bahamas, as any traumatic event would. As one volunteer noted, however, people on the islands are now more willing to discuss mental health, which was formerly a topic off limits.

If you have suffered damage in a hurricane or other storm, you might need the help of an experienced Daytona Beach property damage attorney. Bundza & Rodriguez has helped many people with their insurance claims, and we can help you as well. Contact us today to schedule a free consultation by calling 386-252-5170.

By Bundza & Rodriguez, P.A. | Posted on December 11, 2019
« How to Stay Safe after a Hurricane
Filing a Flood Insurance Claim: What You Need to Know »