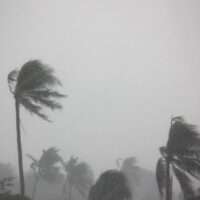 The devastation caused by hurricanes sometimes doesn’t truly begin until the storm pulls out to sea. Many disease outbreaks occur in the immediate aftermath of a natural disaster, when regular sanitation is compromised and sewage seeps into the water system. Although the United States rarely sees the worst outbreaks, we have certainly suffered an increase of certain diseases following natural disasters. Everyone should make personal safety a priority and go to the hospital as soon as they begin to feel sick.

Many diseases spread through floodwater. We saw this after Hurricane Harvey. According to Newsweek, many people contacted skin infections, gastrointestinal infections, and respiratory diseases after Harvey made landfall. One 77-year-old woman fell into floodwaters and developed a flesh-eating infection, which ultimately ended up claiming her life.

In poor countries, cholera and typhoid fever outbreaks can devastate communities. However, this tends to happen because those diseases are already present in the affected communities. In other words, the storm makes the diseases worse. Cholera and typhoid fever are rare in the United States and will not suddenly cause an epidemic unless they are brought in from somewhere else. Nevertheless, many people might fall sick to non-communicable diseases.

In addition to floodwaters, crowding people together in shelters can also increase the risk of illnesses passing from person to person. This is not a reason to avoid a shelter and try to ride out a storm yourself. However, you should be aware that diseases like measles could be transmitted from person to person following a storm.

In the United States, vaccination should have eliminated some of the worst of these illnesses, like measles or mumps, so remember to get your schedule booster shots. Some of these diseases are making a comeback now that many people do not vaccinate their children or arrive in the United States without proper vaccination.

How to Minimize Your Risk of Illness

In the immediate aftermath of a hurricane, people can take steps to protect themselves. You can reduce the likelihood of a gastrointestinal and other illness by taking the following steps:

Bundza & Rodriguez Represents those Affected by Hurricanes in Daytona Beach

If you have a legal claim after a hurricane or other natural disaster, give us a call. We have assisted many clients with insurance disputes and property damage claims, and our lawyers understand how to collect evidence to make a claim.