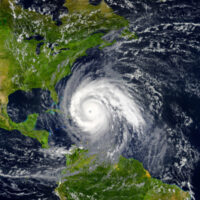 The 2020 hurricane season is already off to a fast start. As one article notes, we have had three named tropical storms in the Atlantic—and the season is barely a week old. At this rate, we could see dozens of storms before everything shakes out.

We can be sure, however, that some communities will struggle more than others. It should be no surprise that hurricanes and other catastrophes have a disproportionate effect on minority communities in Florida and across the south. This means that governments must provide targeted interventions in those places that need help the most.

Several studies from Hurricane Katrina have shown that black people in New Orleans suffered worse than whites during and after the hurricane hit. For example, one study found that the mortality rate for African Americans was up to 4 times higher than for whites over 18.

Another study looked at flood damage due to Katrina and found that black homeowners were over 3 times more likely to have suffered flooding than whites. The reason? Discriminatory lending. Black residents were less likely to be able to afford homes outside the flood zone, so they were some of the first homeowners to get flooded.

New Orleans continues to feel the aftereffects. Almost a third of black residents have never returned to the city more than a decade after the storm struck.

Many lower income communities also take longer to dig out from the devastation—if they ever do at all. Lower income people are less likely to have insurance policies that cover wind damage and flooding. Instead, they might be dependent on government relief efforts, such as temporary housing from the federal government. Unfortunately, government relief is often patchy and can be a long time in coming.

If a homeowner does not have insurance, then they might never be able to repair their home. This represents a significant loss of equity. Again, government funds for home repair could be slow to arrive.

This year’s hurricane season brings with it another challenge—the coronavirus pandemic. Government statistics show that minority communities have born a disproportionate number of deaths due to the virus. The Centers for Disease Control (CDC) have found that the death rate for African Americans in New York City was nearly twice as high as the death rate for whites. The rate for Hispanics was also much higher. Some reasons include lack of access to quality health care and multigenerational families living together.

Please contact the Daytona Beach hurricane insurance claims lawyers at Bundza & Rodriguez, P.A. if you are struggling to get an insurer to pay a claim for hurricane damage. We are committed to the community and will do everything we can to help you get a payment on your policy. Call us today to schedule a free consultation at 386-252-5170.

By Bundza & Rodriguez, P.A. | Posted on June 17, 2020
« Can You Be Forced to Arbitrate a Homeowners’ Insurance Dispute?
Florida Court Finds Utility Not Liable for Nursing Home Deaths During Irma »