New Florida Law Could Criminalize Abandoning Pets During a Hurricane 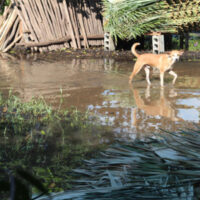 After Hurricane Michael, video emerged of a dog left chained to a fence, completely vulnerable to the storm and unable to find shelter. This and other outrages have prompted some legislators to come up with a new law that would make it illegal to leave an animal tethered outside during a natural disaster. The bill, if implemented, could carry stiff penalties and will hopefully force people to be more considerate of their pets when hurricanes and other disasters approach.

Details of the Bill

According to media reports, the law would apply during any hurricane, tropical storm, or tornado warning. If convicted of the crime, defendants could face up to a year in jail and a $5,000 fine. They will also have to deal with the collateral consequences of a criminal conviction, such as difficulty finding employment or securing an apartment rental.

Concerns have been raised that the bill is too broad by including tornado warnings. As many have commented, they are completely unaware when a warning has been issued, so they would not know when to rush home and unchain their dog. Nevertheless, they would be vulnerable to prosecution.

The bill’s sponsors claim that they can finetune the law and that minor criticisms shouldn’t derail the law. The bill has currently passed a Senate committee but has not yet been picked up in the House.

Even if the bill doesn’t pass, no one should leave their pets outside during a natural disaster. But what should you do, exactly? We have mentioned several times on this blog that not all shelters take animals. So people need to be proactive about how they plan for an emergency. The folks at petMD recommend the following:

Above all else, stay calm. Doing so will also calm your animal, which should make him or her easier to handle as you try to evacuate.

Surviving a storm is half the battle. Getting insurance compensation for damage can also be difficult. At Bundza & Rodriguez, our Daytona Beach hurricane insurance claims lawyers have helped many people after Hurricane Dorian and other storms. Contact us today, 386-252-5170.

By Bundza & Rodriguez, P.A. | Posted on January 28, 2020
« Homeowners Successfully Sue Government for Flooding during Hurricane Harvey
A Look Back at the Worst Hurricanes of the Past Decade »