School buses are widely accepted as one of – if not the- safest ways for students of all ages to get to school. While keeping an estimated 17 million cars off the road during normal school traveling hours, their sheer size and stand-out color make them hard to miss. Yet, school bus related accidents still occur and in Florida, they’re increasing. We analyzed data from the Florida Department of Highway Safety and Motor Vehicles (FLHSMV) between 2012 and 2015 and found a 16 percent increase in accidents statewide.
According to data from the FLHSMV, in 2015 there were 2,698 accidents that directly involved a school bus in the state of Florida. The animated heatmap above shows where each school bus accident occurred in the state from January 1st to December 31st. We can clearly see that the map is “hottest” around Miami, Fort Lauderdale, Tampa, Orlando and Jacksonville. Out of these accidents, there were 1,225 reported injuries. In three of these accidents there were over 40 injuries in each crash. 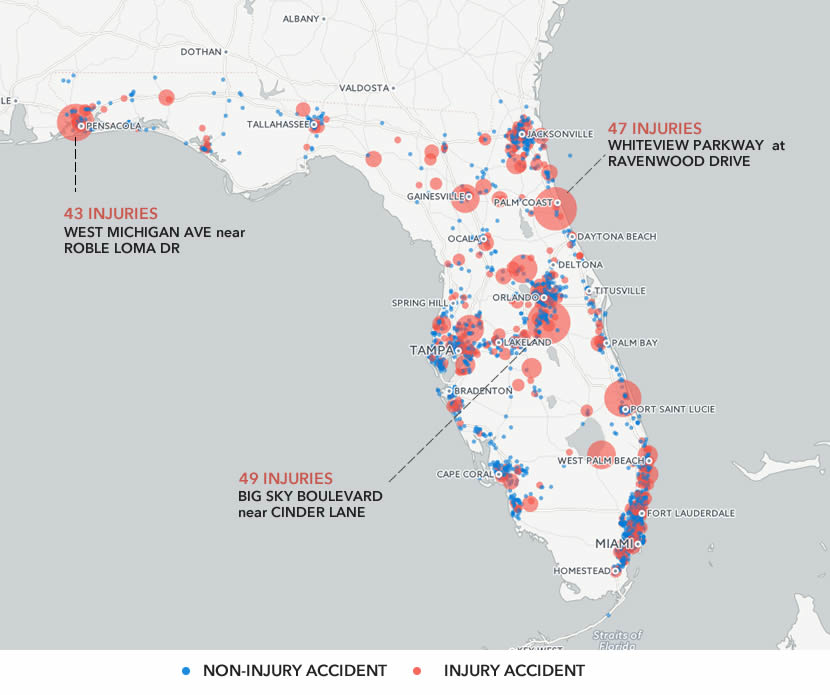 What Counties had the largest increases?

Nineteen Florida counties experienced an increase in school bus related accidents between 2012 and 2015, according to the same FLHSMV data. Thirteen counties saw less than a 50 percent increase while one county, Collier, increased by more than 200 percent. The most populous county, Miami-Dade, experienced a 21 percent increase, rising from 444 accidents in 2012 to 537 in 2015.

But why are these accidents becoming more common? As with regular car accidents, there are often sequences of events leading up to the collision. And just as there are many quick events before a crash, there are more than likely multiple reasons for the increase in crashes- reasons that could vary from school district to school district.

For starters, many schools are adapting to more students which means more buses, new bus routes, and more and new bus drivers. Though not a part of this study’s data, school bus accidents also plagued 2016. In two serious accidents, the bus driver’s were cited for “failure to yield” and “careless driving” while in other crashes, the accident was caused by other drivers sharing the road. The Florida Department of Education (FLDOE) conducts an annual survey where bus drivers report the number of cars that illegally pass them in a single day. Every year, the statewide number is in the thousands. This, of course, puts children boarding and de-boarding the school bus at risk as well as other cars should the passing lead to a crash. Perhaps more troublesome, however, is the “expansion” of illegal passing by drivers; less bus drivers completed the survey in 2015 than in 2014, yet the bus drivers reported more incidents of illegal passing.

We reached out to individuals at FLDOE, FLHSMV and school district employees for more concrete insight, but have yet to hear back. If or when we do, we will update this part of our post. 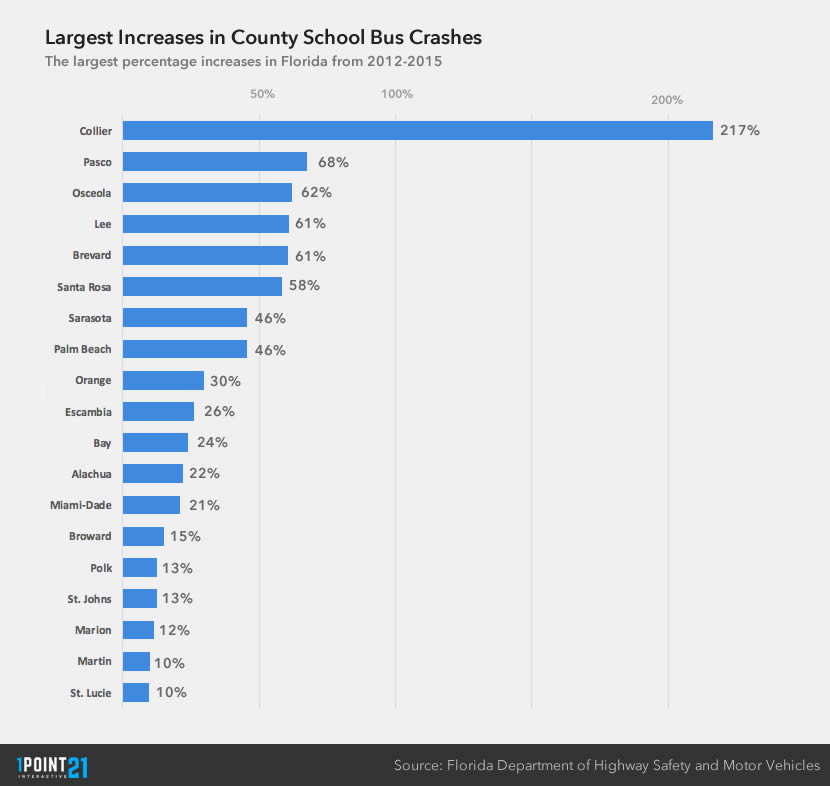 While twenty counties are dealing with a rise in accidents, some are simultaneously reporting a decrease in injuries over the same four-year span. As a state, the rate of injury dropped by 11 percent. The chart below compares the number of accidents (straight line) to the number of injuries (dotted line). 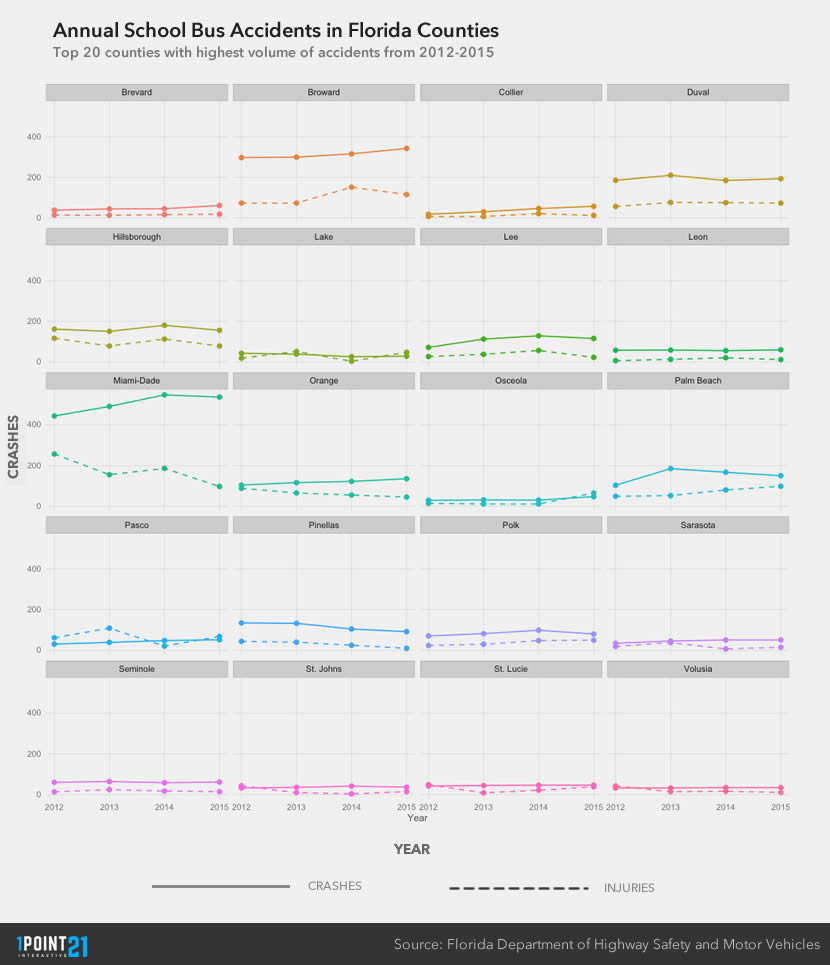 So are school buses still one of the safest ways to get to school? Zoom out to a national perspective and the answer is yes, statistically speaking. On average, 134 people die every year from school bus related accidents; but, only about nine percent of fatalities are from people riding in or driving the bus. The remaining deaths are pedestrians, bicyclists/motorcyclists and overwhelmingly, the passengers of the other car(s) also involved in the accident.

From 2004 to 2013 there were over 340,000 fatal accidents in the U.S., according to the National Highway Traffic Safety Administration (NHTSA). And of those, less than half a percent involved a school-bus related vehicle. In fact, students who take the school bus versus driving with their parents or a teen driver are 20 and 50 times more likely to arrive safely, respectively, according to the American School Bus Council.

It’s fair to suggest that’s because yellow busses aren’t only one of the most recognizable cars on the road, they’re also one of the toughest. Some of the latest improvements – though many safety requirements vary by state- include reinforced side panels for collision protection and increased emergency exit space for swift evacuations.

Number six (seat belts) remains a hot button issue for bus safety- one Florida is technically leading the pack on as one of six states requiring seat belts on all school buses purchased on and after Jan.1, 2001. The state requires a two-point lap belt and gives priority of buses equipped with seat belts to elementary schools. The NHTSA is working towards the remaining 44 states following Florida’s lead; yet, Florida is not injury free 15 years after passing the seat belt law. Then again, neither are cars.

One place where seat belts seem to work effectively- airplanes. And while many may tune out the flight attendant or safety video prior to take off, most people know how to properly wear and adjust the seat belt. Flight attendants also check all passengers to ensure they’re following the safety instructions.

What does this have to do with school busses?

Kids boarding a school bus don’t have safety booklets or bus drivers checking their seat belts before “take off.” But should they?

California and Florida both have liability laws built in with their set belt requirements protecting school districts, teachers, drivers, organizations, etc from state prosecution if a passenger is injured while not wearing their seat belt properly. California, however, also requires school bus passengers be taught how to correctly wear them in an age-appropriate manner. Florida does not.

Should Florida go one step further and require school bus passengers learn how to properly adjust and wear their seat belt?

“The highest priority has to be a focus on the driving task,” the institute concluded in a 2010 study on implementing seat belts on school busses. They called the proposed inspection (not initially suggested by Aronfeld) “unrealistic” and cautioned against viewing seat belts as an “all-purpose preventative measure.”

Even the NHTSA disagreed with installing seat belts at one point. After testing in 2002, they said misused lap and shoulder belts could cause neck or abdominal injuries. Furthermore, they once argued requiring seat belts at a federal level comes with huge financial costs and reduced seats on buses- two unintended consequences that could end with some children finding alternative and less safe rides to school. They didn’t change their position until 2015. Today, the NHTSA wants all school buses to come with three-point seat belts, like a car (meaning Florida would have to update their current law).

And while the debate continues, some child safety advocates have shown great support for NHTSA’s switch. Tina Lewis, for example, of The Player Center for Child Health at Wolfson Children’s Hospital told USA Today the dangers of only having a lap belt, as most Florida buses do.

“There are no bones there to catch the seat belt,” she told USA Today. “So it causes a lot of internal organ damage and in some cases if the crash is severe enough it can cause spinal fractures and spinal separation because the seat belt is not going to stop traveling until it contacts bone.”

That’s not to say no lap belt is safer than lap belts; Lewis continued most injuries depend on the nature and severity of the crash. After all, many counties in Florida saw a decrease in injuries despite the increase in accidents. And let’s not forget school buses keep an estimated 17 million cars off roads surrounding schools each morning.

If you have children who ride the bus we’d love to hear your thoughts on school bus safety, the rise in accidents and why you think injuries are decreasing. As injury attorneys, we stress the importance of talking to your children about following the bus rules and wearing the seat belts properly. We did reach out to Florida state and school officials for their thoughts on why some counties saw a decrease in injuries and will update this post if/when they respond.

When Do Most School Bus Accidents Occur