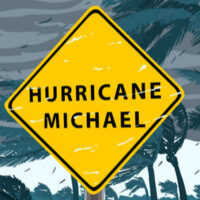 The Florida Department of Health went door-to-door to conduct an interesting survey in Bay and Gulf Counties. The department was seeking information about how residents responded to Hurricane Michael, a Category 5 hurricane that struck Florida in 2018.

Michael caused considerable damage in the Florida Panhandle—about $25 billion all told in property damage—and many people are still struggling with the effects. Bay County in particular was devastated—around 45,000 buildings were damaged and another 1,500 were destroyed outright.

The Florida Department of Health conducted the survey in October and November 2019, about a year after Michael landed. The results show that most people did not evacuate during the storm but that few suffered any injuries.

Most Respondents Did Not Evacuate Before Storm Hit

The Department of Health interviewed 152 people in Bay County and 26 in Gulf county to compile the information. They found that only 43% of people evacuated their homes before the storm hit. Another 14% evacuated their homes after Hurricane Michael landed, but a total of 42% did not evacuate at all.

Those who refused to evacuate had different reasons for staying put and trying to ride out the storm. About 24% of them said they did not see any reason to leave—a serious mistake, given Michael’s power. About 18% said they did not have enough time to evacuate but possibly would have, and around 7% said they feared falling victim to theft.

Interestingly, about 10% decided to stay home to be with their pets. This confirms how important it is for shelters to take animals so that people will feel comfortable leaving their homes when a Category 5 hurricane is racing ashore.

A large majority—4 in 5—did not suffer any injury because of Hurricane Michael. However, about 17% reported being injured during cleanup following the storm. This confirms that people need to be careful in the days after a storm. Buildings can be weakened and at risk of collapsing, just as trees could fall. There are many ways to be injured when cleaning up property, so caution is always warranted.

By contrast, only around 2% were injured during the storm itself. This is remarkable given the widespread property destruction we saw in Bay County.

Negotiating a claim after a storm is difficult. Many insurers fight tooth and nail to minimize payments, forcing many homeowners to fix their properties out of their own pocket.

If you have an insurance dispute after a hurricane or other storm, please contact the Daytona Beach hurricane insurance claims lawyers at Bundza & Rodriguez, P.A. today for a free consultation.

By Bundza & Rodriguez, P.A. | Posted on July 24, 2020
« What to Do Immediately Following a Hurricane
How The Situation Surrounding COVID-19 Increases Personal Injury Risks »