What To Know About Insurance Coverage For Sinkhole Damage In Florida 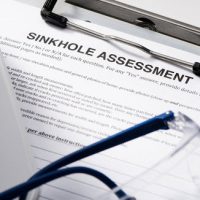 Property damage in Florida can occur in any number of ways, the most common of which include severe storms, hurricanes, fire, and flood events. One unexpected culprit in property damage cases, however, can be sinkholes.

Florida has the most annual sinkhole incidents in the United States, which has led to an increase in sinkhole property damage claims over the past two decades. Florida’s unique geography makes it a prime spot for sinkholes to occur, as the peninsula is made up of porous carbonate rocks such as limestone, with dirt, sand and clay sitting on top of the carbonate rock. The limestone and other surface rock can dissolve over time due to acids created by oxygen in water. This process can create a void, or air pocket, underneath the rock and stone. Once the surface dirt or clay gets too heavy for the rock to sustain, it collapses and forms a sinkhole.

Sinkholes in Florida form naturally but can be triggered by heavy rainfall, tropical storms and hurricanes, and human activity. Human acts such as well drilling, excavating, and other construction-related tasks can reverberate within the ground and weaken the rock that supports dirt and sand at the ground level.

While sinkholes can form and occur suddenly, at times there will be warning signs of an impending issue.

Warning signs of sinkholes include:

Sinkholes can cause severe damage to a home’s foundation or even leave a home destroyed. Other forms of sinkhole damage can include burst pipes, electrical outages, and destruction of the lawn or other exterior areas.

Yes, if the damage is severe. Under Florida Statute Sec. 627.706, every insurer authorized to transact property insurance in Florida “must provide coverage for a catastrophic ground cover collapse.” Coverage is to include the property itself and the contents within. Florida Statute defines “catastrophic ground cover collapse” as including all of the following:

Notably, insurers are not required to pay for damage such as cracks to a foundation or other serious but non-catastrophic issues. Also, this coverage only applies to the principal building insured under your policy. Damage to exterior areas that are not connected to your home or building may not be covered, depending on the terms of your policy and the facts involved.

As you can see, there is some good news and bad news within Florida’s law on insurance coverage for sinkhole damage. A complete loss must be covered, but anything less can be disputed or denied by the insurer in many cases. You will want to review your policy carefully before and after any sinkhole damage occurs, to know what is covered and what is not.

If your insurer is playing games and finding excuses not to pay after your property has been damaged by a sinkhole, you may need to seek legal representation to advance your claim.

The legal team at Bundza & Rodriguez, P.A., will carefully review your policy and all facts involved in your claim, should you run into any serious issues. If your sinkhole damage claim is being delayed or denied by your insurer, call our Daytona law offices at 386-252-5170 or contact our Daytona Beach property damage attorneys online to request a consultation today.

By Bundza & Rodriguez, P.A. | Posted on April 24, 2022
« Roof Maintenance And Rules To Remember
What Are An Insured Property Owner’s Duties After A Loss In Florida? »