Lawmakers Look to Stamp Out Most Forms of Distracted Driving 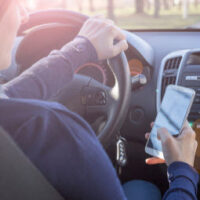 Everyone should know by now that talking on a cell phone or (even worse) sending a text message is a distraction when driving. When you need to have your eyes on the road, looking at a phone only increases the risks of a car accident.

Unfortunately, Florida has not done a good job of minimizing distracted driving, but two members of the legislature are trying to change that. According to the Tampa Bay Times, it could soon be illegal to do many things behind the wheel—even petting your dog while driving.

Currently, it is a secondary offense in Florida to use a phone to write or send an email or text. This means that a police officer needs another reason to pull you over before they will write a citation for using the cell phone.

However, Senator Wilton Simpson and Representative Jackie Toledo hope to change that. They have introduced legislation that will make hold a phone a primary offense. This means that a police officer who sees you holding the phone can pull you over for that reason alone.

When the bill was introduced, something dramatic happened. While the Senate’s Infrastructure and Security Committee was holding a hearing on the bill, the Senators decided to make it more expansive.

The legislation as amended contains a list of actions that would be illegal:

But the law also allows police to pull drivers over if they engage in any activity that constitutes a distraction.

Though the new law would undoubtedly reduce distracted driving, it has come under certain criticism. For example, its broad language could make even eating or drinking a coffee while driving illegal. After all, if you are drinking a hot coffee you are not 100% paying attention to the road. Does this mean groggy people on their way to the office would be pulled over for sipping a latte?

Supporters have countered that the act would need to actually contribute to distracted driving before a person could be pulled over. For example, someone eating a burger who is swerving could be stopped but someone who is eating while driving normally could not be pulled over because there is no proof that eating impacted their ability to drive.

Other critics have claimed that the vague nature could lead to racial profiling, which is already a problem in Florida. Because the law is vague, officers who want to target people of a certain race or ethnicity could claim that the person was taking action that looked distracting—whether they really were or not. However, proponents have vowed to make the proposed law better and claim to be listening to criticism.

Injured in a Distracted Driving Incident? Call Us

Distracted driving causes thousands of injuries a day, leading to increased medical costs and lost income. If you have been injured in a distracted driving incident, contact Bundza & Rodriguez today.

We have decades of combined experience bringing cases for compensation. If you need help, we are here for you. Please call 386-252-5170. One of our Daytona Beach car accident lawyers will meet with you for a free, no risk consultation.

By Bundza & Rodriguez, P.A. | Posted on April 12, 2019
« How to Minimize Scarring after an Accident
Florida May Soon Require Recording Interrogations »