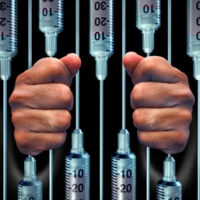 A new report published in a top neurology journal highlights a disturbing trend of people with Parkinson’s disease receiving inappropriate therapies for dementia.

The report, titled “Patterns of Dementia Treatment and Frank Prescribing Errors in Older Adults with Parkinson Disease,” pointed out that those living in the South and Midwest were more likely to receive inappropriate therapies for dementia. As a result, many patients got worse, not better.

Many patients with Parkinson’s disease are at risk of developing dementia, so doctors often end up treating both conditions simultaneously. Unfortunately, the prescription drug choices they make can actually end up harming patients.

Researchers studied the medical records of almost 270,000 people who received Medicare benefits. Based on the study, about 45% of people with Parkinson’s disease and dementia filled a prescription for medication that could make their cognitive impairment worse.

Problems arose when doctors prescribed patients a drug with high anticholinergic activity, like Maneda, but also another drug that is an acetylcholinesterase inhibitor, such as Exelon or Aricept. Prescribing these drugs together is called a “never event,” because it was the kind of shocking medication error that should never happen. Unfortunately, as this report showed, these “never events” happen with some regularity, and they can contribute to a loved one’s disability.

Differences by Race and Sex

Prescription errors were not found evenly distributed across the population. Instead, researchers found clusters of inappropriate prescriptions particularly in the Midwest and the South.

Doctors owe their patients a duty of care, and when doctors violate this duty injured patients can hold them accountable. Patients suffering from Parkinson’s or dementia often suffer in silence, since they often cannot analyze the medication they are receiving or communicate effectively with family. Family members might also feel overwhelmed and not look as closely as they should to see that their loved one has received appropriate treatment.

If your loved one has suffered a dramatic decline in cognitive performance, you might want to take him or her to a different doctor for a second opinion. This doctor can review the prescriptions your loved one is receiving and see if anything is actually harming them.

At Bundza & Rodriguez, we represent patients who have been injured by prescription errors. For help with your case, please reach out to us today. Our attorneys know how to bring successful claims for compensation, and we are happy to analyze your case to determine whether you have a legitimate legal complaint.