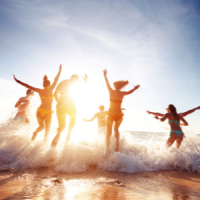 March and April are popular months for spring break trips. Plenty of tourists will be visiting the Daytona Beach area while residents often book flights at this time of year to other popular destinations. Flying always carries with it some inconveniences, but generally, people tend to downplay the risks. Unfortunately, serious personal injuries can occur. If you are planning on traveling, be aware of some of the potential dangers involved.

According to WESH 2 News, three people were killed when a plane crashed recently while headed to Daytona Beach. Officials state that a Cessna 182 experienced problems shortly after take-off from Gainesville, GA, and eventually crashing into a ravine and killing the pilot and passengers on board. A nearby home had to be evacuated due to spilled fuel and wreckage. Officials are investigating but have not revealed what the cause of the crash was yet.

These types of incidents send a chill down the spine of airline passengers everywhere. Most reassure themselves that airplane crashes do not happen regularly. The National Safety Council (NSC) confirms that generally, there are less than 100 commercial airline accidents each year, a relatively small number considering how many flights go out across the country each day. However, general aviation crashes are far more common. Close to 1,500 incidents such as the one above happen annually, claiming the lives of more than 400 people.

When booking a flight, whether through a commercial carrier or private plane service, it is important to check into safety records. Airline Ratings provides a simple tool to help you in the process.  It is also important to be aware of onboard issues that could put you at risk.

While airplane accidents may happen infrequently, onboard incidents are far more common. One of the biggest dangers concerns slips and falls and getting struck by or against objects. To protect yourself, follow these tips:

If an onboard incident does happen, report it to a flight attendant immediately and get medical attention once the flight lands. Sprained muscles or tendons and back, neck, or head injuries are all common airplane injuries, with symptoms that take days to appear.

When personal injuries happen during a flight, reach out to Bundza & Rodriguez, P.A. We deal with airline officials on your behalf and help you get the compensation you need to recover. Call or contact our Daytona Beach personal injury attorneys online to request a consultation today.

By Bundza & Rodriguez, P.A. | Posted on April 10, 2021
« Dog Fighting Carries Serious Criminal Charges In Daytona Beach
Volusia County Ranked As One of The Most Dangerous Places For Pedestrian Accidents »