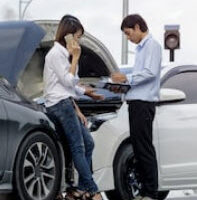 While even seemingly minor car accidents in Daytona Beach can often result in serious personal injuries, certain types of collisions are particularly dangerous. Side impact crashes, otherwise known as ‘t-bone’ accidents, are among the most common and potentially deadly. For drivers in our area, it is important to be aware of the risks and how these accidents often happen.

A recent t-bone car accident in Volusia County left a 48-year-old South Daytona Beach man with fatal injuries. According to an October 10, 2020 ClickOrlando.com news report, the crash occurred at roughly 6:30 a.m. on a Friday morning. It happened at South Clyde Morris Boulevard, at the intersection of New Bellevue Avenue. Police investigations indicate that the victim, who was in the right hand lane and headed south while driving a silver Suzuki Vl 800 motorcycle, struck another driver in a 2016 silver Kia Forte LX while making a turn.

Witnesses report that the 51-year-old woman driving the Kia had completely stopped at the intersection before proceeding forward, directly into the motorcyclist’s path. The force of the t-bone accident knocked the motorcyclist off his Suzuki and caused the Kia to spin out of control.  The car eventually came to a stop in the middle of the road, facing the opposite direction.

While the woman driving the Kia suffered only minor injuries in the crash, the motorcyclist was fatally hurt and pronounced dead at the scene. Police are continuing to conduct investigations into the case but report that charges are currently pending against the female driver involved.

Any type of crash has the potential to cause serious harm. However, car accident statistics from the Insurance Information Institute (III) report that side impact or t-bone crashes are the most deadly type of collision. They are one of the most common causes of traffic fatalities, responsible for nearly 6,000 deaths each year and leave hundreds of thousands of other drivers and passengers suffering serious and potentially disabling personal injuries.

T-bone car accidents are particularly deadly when they involve vehicles of uneven sizes. This includes cases such as the above that involve motorists and motorcyclists, as well as collisions between trucks, SUVs, and regularly sized automobiles.

While dangerous intersections and heavy traffic congestion can make t-bone accidents more likely to happen, dangerous driving behaviors on the part of one of the motorists involved is often to blame. This includes:

When you or someone you love is involved in a t-bone crash, Bundza & Rodriguez, P.A. provides the professional legal representation you need in filing a claim. To request a consultation, call or contact our Daytona Beach car accident attorneys online today.