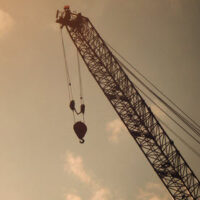 Construction has been booming in Florida recently, with high rises going up around the state. A recent construction accident across the country in Seattle, however, is a timely reminder of just how dangerous job sites can be. And, unfortunately, many innocent members of the public end up injured.

If you or someone you care about has been hurt at or near a construction site, please contact an attorney right away. You might be entitled to compensation.

The crane that fell was atop Google’s new campus in Seattle on one of the busiest streets in the city. According to the St. Louis Post-Dispatch, high winds caused the crane to come crashing down. Emergency personnel rushed to the scene, but four people had died. Two of them were construction workers who had been inside the crane at the time of collapse. The other two victims were in a vehicle that was struck.

Is Someone to Blame for this Accident?

Although the media is blaming high winds for the crane crashing down, other people or entities could also be responsible. We can only speculate, but sometimes cranes crash for the following reasons:

If any of these are true and contributed to the crash, then injured victims could possibly bring a lawsuit against the construction worker, the general contractor, or the crane manufacturer.

Crane Accidents are Not Rare

Crane accidents are some of the most horrific accidents, given the weight of the crane. When it falls into buildings or the road, innocent people can be crushed to death. This is not the first crane collapse in Seattle. A crane that fell in 2006 crushed a Microsoft attorney who was sitting in his living room.

If you have suffered an injury at a construction site, call Bundza & Rodriguez today. Our attorneys have helped injured victims receive millions of dollars in compensation, and we are eager to help you, too.

For more information, schedule a free consultation with one of our Daytona Beach construction site accident attorneys. You can call 386-252-5170 or send us an online message.