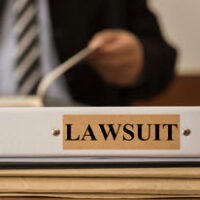 Though he has been out of the public eye for the past few years, many of our readers will probably remember Harry Reid, the Senator from Nevada. For 8 years, Reid was the Senate Majority Leader and often tangled with Republicans in the Senate while Obama was President. He even gained notoriety by claiming that Presidential candidate Mitt Romney had lied on his taxes.

Before retiring, Reid suffered a serious injury while using a piece of exercise equipment, causing blindness in one eye. Reid and his wife ultimately brought a lawsuit against the manufacturer. However, according to CBS News, Reid has lost his personal injury lawsuit. And his case illustrates the importance of preserving evidence after an injury.

According to Reid, he was injured while using a TheraBand exercise band. He alleged that the band slipped his grip, which caused him to fall face-first to the floor. He sustained blindness in one eye, as well as fractured ribs, broken bones in the face, bruises, and a concussion.

However, the defense attorney pointed to conflicting statements Reid made about how he was injured. For example, Reid initially claimed that the band was broken. He also stated that he had attached it to a metal hook in the wall. However, on the witness stand, Reid claimed that he looped the elastic band through a handle on the shower door.

These statements provided an opening for the defense to claim that Reid did not use the device properly, which means he couldn’t blame the company for his injuries.

Reid faced an even worse problem: he couldn’t produce the TheraBand that he claimed slipped from his grip. Indeed, his son claimed to have thrown the band away after the accident. It is not surprising that the jury only deliberated for one hour after 8 days of testimony.

This is one of the key errors injured victims can make: they destroy the defective product they claimed injured them. The jury couldn’t even find that Reid had in fact used a TheraBand exercise band. Without that finding, there was no way they could hold the defendant responsible for the accident.

If you have been injured by a defective product, preserve whatever remains of it. This is critical evidence that you must have to prove you actually were using the product.

No Money for Senator Reid

Because he lost his lawsuit, Reid will not receive compensation from the manufacturer of the exercise band. This means he is fully responsible for the medical bills he has incurred as a result of the accident.

To protect your case, we strongly encourage anyone injured by a defective product to reach out to a Daytona Beach personal injury lawyer as soon as possible. At Bundza & Rodriguez, we will work with you to preserve as much helpful evidence as possible, thus strengthening your case. We will also work to maximize the compensation you can receive from the manufacturer of the hazardous product.

By Bundza & Rodriguez, P.A. | Posted on May 1, 2019
« Will Florida Repeal No-Fault Insurance?
Will Florida Reform its Juvenile Justice System? »