How Common Are Rollover Car Accidents? 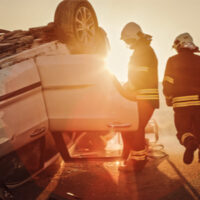 Rollover car accidents are a serious concern for owners of different types of automobiles. They are common among truck drivers, as well as among those with Jeeps or SUVs. The taller heights at which these vehicles sit make them more likely to become unbalanced. When they do roll over, it can cause serious injuries to the driver, their passengers, and others on the road.

A recent rollover car accident in Volusia County claimed the life of one woman and endangered other drivers involved. According to a September 29, 2020 Daytona Beach News-Journal report, the crash happened at roughly 2:00 p.m. on U.S. Highway 17 in Pierson. Authorities say the woman was driving a pick-up truck in the southbound lanes and attempted to pass two other motorists from behind.

An SUV was first in line, followed by a sedan and then the woman’s pickup truck. As she moved out of the line in an attempt to pass both vehicles, the sedan driver moved to pass the SUV as well. She collided with the sedan as a result, causing the truck to run off the road and rollover. As she was not wearing a seatbelt, the woman was thrown from the vehicle and died at the scene. Police are continuing to investigate the case.

Consumer Reports states that while vehicle rollovers are one of the least common types of crashes, representing only three percent of all car accidents, they are among the most deadly. Rollover car accidents are responsible for roughly 30 percent of all traffic fatalities each year. In many cases, a variety of factors are to blame.

Design or manufacturing defects can contribute to rollover accidents and have prompted a number of consumer recalls over the years. Rollover accident risks have also resulted in stricter regulations regarding pickup trucks, Jeeps, and in particular, SUVs. There are also other, driver-related factors that increase rollover risks:

Drivers can help to prevent rollover accidents by using care in loading their vehicles, driving at or somewhat below the speed limit in adverse weather or road conditions, and using extra caution when making turns or approaching curves in the road. Wearing a seatbelt reduces the risks of serious injuries in the event a rollover car accident does occur.

At Bundza & Rodriguez, P.A., we help people injured in rollovers and other types of car accidents get the compensation they need to recover in a claim. Call or contact our Daytona Beach car accident attorneys to request a consultation today.