Looking At The Evidence In Your Criminal Case 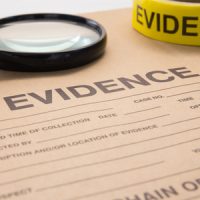 Being charged with any type of crime in Daytona Beach is a serious matter. In addition to heavy fines, court costs, and a potentially lengthy jail sentence, a conviction will result in a criminal record that follows you the rest of your life. To protect yourself, it is important to get an experienced Daytona Beach criminal defense attorney on your side right away. In conducting our own investigations, one of the first things we will look at is the evidence against you. The following details some of the common types of evidence and how it is likely to be used in your case.

If you are charged with any type of crime in Daytona Beach, your case will likely be heard through the Volusia County Criminal Court. One of the first things that will happen is that you will be scheduled to appear before the judge assigned to your case at a preliminary hearing. During this hearing, evidence will be presented by the police and prosecutors to show why criminal charges were filed against you and why you should be held for trial.

Once the judge makes the decision to proceed with criminal charges, additional types of evidence will be collected. This is likely to include:

How Evidence Is Used By The Prosecution and Defense

Under the Florida Statutes, there are strict rules regarding how evidence can be used in criminal cases. The burden of proof falls on prosecutors, meaning the evidence they present will serve to implicate you in the crime, while the defense will provide evidence to the contrary or that disputes their claims. Motions for discovery will be filed before your case goes to trial, which requires the prosecutor to reveal and share their evidence with the defense team. Evidence which may be deemed inadmissible in your case includes:

At Bundza & Rodriguez, P.A., you can count on our legal team to help you dispute evidence collected by prosecutors while gathering our own compelling evidence in your defense. To discuss your case and how we can help, call or contact our Daytona Beach criminal defense attorneys online and request a consultation today.