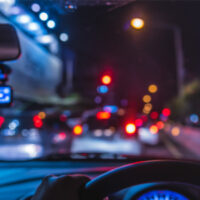 Car accidents in Daytona Beach can happen at any time of day. However, driving after dark definitely increases the risk. While poor night vision and a lack of lighting on roads can make seeing the road and other drivers more difficult, the biggest dangers come from motorists who are drowsy or driving under the influence of alcohol and drugs.

A Port Orange woman was recently arrested in Daytona Beach Shores after police claim she fell asleep while driving with her two-year-old daughter in the backseat. A September 28, 2020 Daytona Beach News-Journal report claims that an officer spotted her vehicle stopped in an intersection shortly after 1:00 a.m.

After she failed to move, he approached the passenger side of the car to investigate and could hear loud music blaring but saw no movement on the part of the driver. The officer ended up having to pound on the window numerous times to wake her up. Once she was awake and realized what happened, she attempted to flee the scene.

The police officer apprehended and arrested the woman, who had the vehicle in gear and her foot on the brake during the time she was passed out behind the wheel. She also had her two-year-old daughter strapped into the backseat and there appeared to be recent damage to the vehicle, indicating some type of collision earlier that evening. The Department of Children and Families was notified and the woman was charged with driving under the influence of drugs or alcohol. She also faces criminal charges for an action against a child that could result in physical or mental injury.

The above incident illustrates the potential dangers that drivers can encounter on the roads once it gets dark. The National Safety Council (NSC) states that while only a quarter of all driving happens overnight, car accidents that occur after dark make up more than a third of all fatal crashes. As in the above case, motorists who engage in drowsy driving and those driving under the influence of alcohol and drugs are the biggest threats. Ways you can protect yourself include:

When another driver’s dangerous behavior causes you to suffer car accident injuries, Bundza & Rodriguez, P.A. is here to help. We hold them accountable so you can get the compensation you need to recover. To request a consultation, call or contact our Daytona Beach car accident attorneys online today.