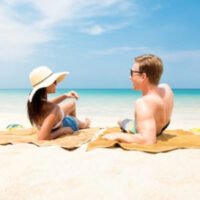 You might think the greatest risk of sunbathing is exposure to UV rays, which contribute to cancer and premature aging. However, a recent story from the Florida Times-Union highlights the danger of motor vehicles to sun worshippers. Protect yourself by always remaining alert to your surroundings and contacting the police if you see people driving on the beach.

The two accidents happened in Northeast Florida but could have happened anywhere there are beaches. According to the Times-Union, one victim was a 53-year-old woman visiting from Ohio who was out enjoying the sun at Seaside Park. She ended up getting run over by a Jeep Cherokee. Alarmingly, the driver of the Jeep apparently saw the woman and had been warned that he would hit her.

The victim was taken to the hospital with several injuries that are thankfully not life threatening, although she did have a blood clot in her chest.

The second victim was a 38-year-old woman visiting from Georgia. She was sunbathing at Peters Point Beachfront Park about 300 feet from the access point. A jeep carrying two people ran over her legs and then fled the scene. According to her attorney, she cannot walk and is still struggling with injuries even though the accident happened back in April.

Are these Accidents Rising?

The Times-Union notes that no one keeps statistics tabulating the number of beach accident. Nevertheless, the paper relied on anecdotal evidence to argue that they very well could be increasing.  Other incidents from 2018 include a woman visiting from Brooklyn, New York who was run over by an Audi while sunbathing.

Unfortunately, beach goers have few options for protecting themselves. We wish that safety could be found in a sunscreen bottle, but anyone lying on the beach is exposing themselves to the risk of a person driving on the sand and hitting them. At best, you should always be aware of your surroundings. Try not to wear earphones but listen for approaching vehicles.

We wish the only people riding on the beach were drunk young people. But many beachgoers have also been injured when city personnel run them over. For example, a teenage girl was run over by an Atlantic Beach parks employee in 2016 and suffered bad burns when she was pinned underneath the vehicle’s carriage. Other victims have also been struck by parks employees who were not paying attention to where they were going.

Were You Injured? Reach Out to Us Today

Beach accidents might be increasing, but there are steps victims can take to protect themselves after suffering injuries. Bundza & Rodriguez is a leading Daytona Beach personal injury law firm with a long roster of happy clients. Contact us today.

Our Daytona Beach personal injury attorneys can swing into action to hold the driver who hit you accountable. Even if the driver fled the scene, we might be able to track him down or get you compensation for your injuries. Call us at 386-252-5170 to schedule a free, no-cost consultation.

By Bundza & Rodriguez, P.A. | Posted on June 20, 2019
« Want to Threaten Harm to Someone? Think Again
Should You Give a Recorded Statement to an Insurance Agent? »