What to Do after a Fall in Walmart 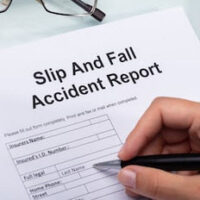 A recent lawsuit in Pinellas County raises questions about what customers should do when they are injured in a big box store like Walmart. Large corporations are not like mom-and-pop stores. They have much more money, huge armies of lawyers, and are more aggressive at denying injured victims compensation. With proper planning, however, you can still hold them accountable when the store’s negligence injures you.

Fall at a Supercenter

The lawsuit was filed October 30, 2018 against Wal-Mart Stores, LP, and alleges that the plaintiff fell because Walmart allowed a dangerous condition to exist in the vicinity of the infant department.

Specifically, plaintiff Heather Phinney alleges that she tripped and fell because of a worn and raised floorboard. After falling, Phinney claims she struck her head, suffering severe injuries, pain and suffering, and mental anguish. She also incurred sizeable medical bills to pay for her treatment.

The plaintiff has asked for more than $15,000 in compensation and is seeking court costs and attorney fees. She has also asked the court for a jury trial.

Bringing a lawsuit against a giant corporation like Walmart can be an unnerving experience for the average person. For one thing, Walmart has an entire corporation focuses solely on handling lawsuits—Claims Management, Inc., called “CMI.” This company’s primary person is to make sure that Walmart pays out as little as possible to injured victims. In fact, this is how CMI justifies its existence. If it were not reaping tangible benefits for Walmart, it wouldn’t exist.

CMI’s representatives can be very aggressive and may make claims that don’t stand up to scrutiny. For example, your rep might say that you are legally required to give a recorded statement. The truth is much more complicated—you will probably need to give a statement to the company, but you can do it on your own terms. CMI doesn’t have a right to tell you when and where to give a statement, and we always advise injured victims to hire an attorney before speaking to the company.

Walmart will also aggressively investigate a claim to determine whether they can deny responsibility. Like all businesses, Walmart owes its customers a duty to keep the property reasonably safe, but it is up to you to document the hazard that caused you to slip and fall.

If possible, take a picture immediately after falling. For example, if you slip on freshly mopped floors, take a picture of the water on the ground, as well as the absence of any sign or warning. If you are too injured, ask someone else to take the pictures for you. Getting documentary proof of the hazard can prevent Walmart from fixing the dangerous condition and then denying it ever existed.

Get Someone in Your Corner

The smartest choice you can make if you slip and fall in Walmart or another store is to hire an experienced lawyer as soon as possible. At Bundza & Rodriguez, our Volusia County personal injury lawyers have gone up against some of Florida’s largest corporations. We are not afraid to sue, and we take pride on maximizing the amount of compensation our clients can receive.