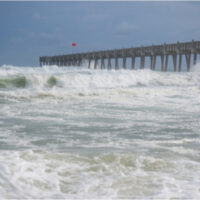 As we have written about before, hurricanes increasingly cause more damage due to flooding than the high-speed winds that slam into buildings. Storm surge, in particular, is a serious problem on the coast of Florida. High waves can swamp roads and damage buildings. Indeed, floodwaters have accounted for half of all deaths in hurricanes for the past 50 years. Storm surge was responsible for almost all of the deaths in Hurricane Katrina.

Many communities are trying to devise ways to protect themselves by installing protective barriers. Some of these barriers, however, are very unattractive. They also threaten to restrict access to the beach, which is a serious problem in Florida, where our beaches are one of our state’s main draws.

From USA Today comes an interesting story of engineers from Princeton University who have designed concrete umbrellas, that can protect beach goers from the sun but also hold back storm surge when another storm strikes. Although this sounds too good to be true, the engineering behind these umbrellas is apparently sound.

Some might be surprised that a mere four inches of reinforced concrete can actually hold back a wall of water. During Super Storm Sandy, for example, a wall nearly 9 feet tall devastated parts of New York and New Jersey. However, the engineers stressed that they have taken advantage of the design’s geometry, which makes them very strong when set up to protect against storm surge.

The engineers behind the design hope to incorporate sustainable materials and to allow them to capture solar energy, which would make them a definite asset to have in the community.

How to Protect Your Home from Storm Surge

Though these umbrellas are innovative, there’s no evidence that cities like Daytona Beach will pay to install them any time soon. Consequently, homeowners must take more tried-and-true, low tech methods to protect their homes.

For example, you should install a sump pump, which can pump out any water that intrudes in your basement. You can also investigate purchasing surge-proof exterior doors for your home. Windows should also have storm shutters, which also protect against the wind.

As always, make sure to purchase flood insurance. Most consumers buy it through the government program, since it is hard to buy flood insurance from private insurers. Your homeowners policy will not cover damage from floodwaters.

For Help with an Insurance Claim, Please Contact Us

Bundza & Rodriguez, P.A. is a leading law firm dedicated to helping residents with insurance claims arising out of hurricanes and other storms. If your insurer has denied your claim or is dragging its heels, please contact our Daytona Beach flood damage attorneys for more information. You can schedule your free consultation by calling 386-252-5170 or sending us an online message.