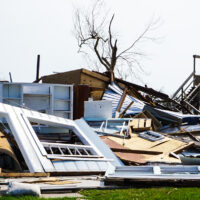 According to the Panama City News Herald, the Florida Building Commission has taken steps to increase requirements to ensure that structures are resistant to hurricanes. Thomas Campbell, who is the executive director of the commission, gave members of the Senate Community Affairs Committee a summary of the changes his Commission has approved.

One change involved rooftop decks, which will need to ensure that they are properly sealed so they prevent water intrusion. Flooding, of course, is a major cause of building damage during hurricanes, and rooftop decks often contribute to water running into a home. The Building Commission updates its code every 3 years, and the public can weigh in on the changes during one of the public meetings held during either February or April. The new code is expected to be finalized by December 2020.

Before 2002, Florida had no statewide building code for hurricanes. That year, the legislature adopted its first statewide code, which has had a dramatic effect reducing storm damage.

According to a research paper from the Wharton School, buildings constructed after the adoption of the Florida Building Code had “significantly lower losses” than homes that had been built only a decade earlier. This building code has no doubt saved Florida hundreds of millions of dollars as well as many lives.

Although the code applies state-wide, there are different requirements regarding wind resistance that vary depending on the part of the state. Miami-Dade and Broward counties, for example, require that the entire envelop incorporate wind-resistant design. Other parts of the state, such as the Panhandle, do not have this requirement, which means more damage can occur during peak winds in those areas. When Hurricane Michael struck the panhandle, for example, many buildings were destroyed.

Will the Code Weaken in the Future?

When Florida’s legislature drafted its initial building code in 2000, they used the most recent International Code Council (ICC) standards as its baseline, as well as for updates every 3 years. However, in 2017, the legislature decided not to continue following the ICC. This is surprising, given how successful the code has been at reducing hurricane damage.

Instead, the legislature adopted revisions that were put forward by the Florida Home Builders Association, a trade association whose clients involve home builders. Florida is now free to choose whichever standards or revisions it wants, regardless of whether they are adopted by the ICC. This move received strong criticism from those who work in emergency management.

Although the proposed changes involving rooftop decks suggest the Commission is trying to strengthen the building code, other changes could be afoot that ultimately weaken it in the future. Concerned community members should attend one of the public meetings to find out more about changes.

After a storm, insurers should promptly settle property damage claims. Unfortunately, many insurers drag their feet or deny valid claims.

If you need help, give our law firm a call. One of our Daytona Beach property damage lawyers will meet with you for a free consultation.

By Bundza & Rodriguez, P.A. | Posted on November 22, 2019
« Thousands File Insurance Claims for Dorian Damage
Look for Mold after a Hurricane »