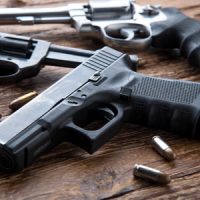 While residents of Daytona Beach and cities throughout Florida are generally quick to defend their constitutional right to buy a gun and to carry it on them at all times, the fact is that these rights are somewhat restricted by state laws. Failure to comply could result in serious criminal charges, as could having a gun in your possession or using it in the course of committing another alleged crime. Without a strong criminal defense, several recent incidents involving gun crimes in Daytona Beach are likely to result in heavy penalties.

Police have arrested suspects in a recent rash of gun crimes in our area. According to a November 15, 2020 report by the Daytona Beach News-Journal, a local man was apprehended after a drive-by shooting on West International Speedway Boulevard which peppered a home with bullets and left a woman inside with a potentially serious gunshot wound to the leg. Law enforcement reports state that the incident happened around 5:30 p.m. on a Sunday afternoon and stemmed from a dispute the man had with the women.

In a similar incident reported by the News-Journal just a few days prior, a South Daytona Beach man faces charges for allegedly shooting a female acquaintance from his car while she stood on a sidewalk near the intersection of Dr. Martin Luther King, Jr. Boulevard and Bellevue Avenue. These are just two of a string of gun crimes to happen in the area recently. In a related event, Click Orlando reported that another Daytona Beach man has been apprehended for his role in a drive-by shooting that happened back in September and targeted two separate victims.

Under the Florida Statutes, using a gun in connection with an assault, theft, or other type of crime could result in serious sentencing enhancements. Potential penalties upon conviction include up to 15 years in jail, along with any other punishments you face.

Even if no crime is committed, you could face charges for purchasing or possessing a gun in Florida, depending on the situation. While the Second Amendment of the U.S. Constitution protects your right to bear arms, the following is prohibited under state laws:

To protect yourself against the serious penalties associated with gun charges, get our legal team at Bundza & Rodriguez, P.A. on your side. To request a consultation, call or contact our Daytona Beach criminal defense attorneys online today.

By Bundza & Rodriguez, P.A. | Posted on December 11, 2020
« Pedestrian Accidents In Daytona Beach: Two People Killed In Separate Incidents On Same Day
Traveling Over The Holidays? Follow These Tips To Reach Your Destination Safely »