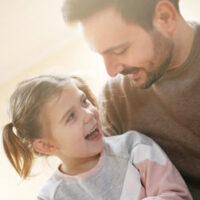 Ask any lawyer what got him or her interested in the legal profession, and the lawyer will probably tell you that one of the most enjoyable aspects of studying the law is that it approaches philosophical questions in a rational way. Another thing that attracts students to the legal profession is that it allows them to help people exercise the rights granted to them by the Constitution and by the legal tradition. One of the most challenging questions in Florida law, and one of the most emotionally fraught, is this one: What makes someone a father? Florida’s paternity laws sometimes grant parental rights in ways that many people would find surprising.

When a child’s biological mother and father are married to each other at the time of the child’s birth, establishing legal paternity is very simple. In almost all cases, the mother’s husband is automatically designated the legal father. (Likewise, he is almost always the child’s biological father.) When the mother is not married at the time of the child’s birth, the man who wishes to be named as the legal father can file a Voluntary Acknowledgement of Paternity, with or without DNA testing to prove a genetic relationship between the child and the prospective legal father.  In fact, courts tend to require DNA testing when a man denies that he is the biological father and therefore, denies that he has a financial responsibility to the child. This often happens when the mother applies for public assistance, and no legal father has been named. In other words, intent to raise a child is the most important criterion for paternity; a genetic relationship is the second most important.

When Marriage Is More Important Than DNA

On the one hand, the courts want to avoid breaking up families. They want to avoid taking a child away from the only father he or she has ever known. On the other hand, the above cases represent discouraging news for unmarried biological fathers. One possible solution to this problem is to have children DNA tested at birth when there is any question of biological paternity, even if the mother is married at the time of the child’s birth.

We Can Help with Paternity Cases

The older the child is when there is a controversy over his or her parentage, the more difficult matters are. It is in everyone’s interest to resolve matters of legal paternity when the child is very young. Contact Bundza & Rodriguez, P.A. with any questions about establishing legal paternity.