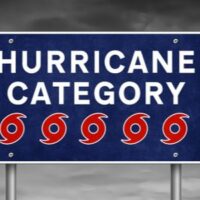 Currently, hurricanes are measured on a Category 1-5 scale that is based on the maximum sustained wind speed. However, some scientists have begun to question whether this is really the best way to categorize hurricanes. According to their thinking, wind speed is not the best gauge for judging the dangerousness of a storm.

One scientist at Colorado State University has proposed a new scale that will use surface air pressure as the defining factor in categorizing storms. The Sarasota Herald Tribune has reported on the proposal.

When some people think about the most dangerous recent storms, they probably think of Hurricane Katrina which struck the United States in 2005. But according to the current scale, Katrina was only a Category 3 when it hit the United States, two notches below the most powerful storm, which is Category 5. Other storms, like Sandy in 2012, were not even categorized as hurricanes.

Professor Phil Klotzbach wants to change that. He has published a paper in a leading meteorological journal proposing to use air pressure in the hurricane as the measure of its intensity. The lower the pressure, the stronger—and more dangerous—the storm.

This change would have upgraded Hurricane Katrina to a Category 5 and Superstorm Sandy would have been a Category 4. Storms that expand and cover more area might have reduced wind speeds but still very low pressure, which means they can cause considerable destruction. These storms also have the potential to create a powerful storm surge, which scientists are increasingly recognizing is a leading cause of destruction.

According to Klotzbach, the correlation between air pressure and damage is more significant than that between wind speed and damage. This would make his new scale perhaps more helpful for assessing risk.

Using a pressure-based scale, Hurricane Michael would also have been upgraded to a Category 5, which makes sense. This storm caused serious destruction, wiping out some communities like Mexico Beach. Other storms that would have been upgraded include Hurricane Ike, which was a Category 2 based on wind speeds but would have been a major storm, Category 3, based on central pressure. Ike pushed a storm surge 20-feet high onto shore, killing dozens.

Is the Public Ready for a New Scale?

One argument against scrapping the Saffir-Simpson scale is that the public might not fully understand that low central pressure is dangerous. By contrast, the public generally grasps that higher winds are more dangerous, so they will respond accordingly.

But we think the public can be educated. Certainly, the current scale harms people if it leads them to believe that an approaching storm is minor because it is only a Category 1 or, like Superstorm Sandy, not even a hurricane.

By Bundza & Rodriguez, P.A. | Posted on July 8, 2020
« Why Stormwater Runoff is a Danger
Should Hurricane Season Start Earlier? »